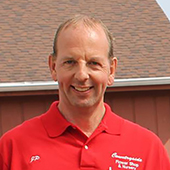 A twenty-five year veteran of the industry, Johanne Pieterse (JP) began his career working with his family’s cut rose greenhouse in Amstelveen.  At the young age of 26, he purchased and managed  his own expansive greenhouse operation which produced 10 million stems annually.  In 2012, JP came to the U.S. to manage an 8-acre orchid facility producing 1.8 million Phalaenopsis orchids yearly.  His successful career continued when he became the General Manager of a 85-acre facility at Colorpoint, the sixth largest commercial greenhouse operation in the United States.
JP comes from strong family roots.  He credits his parents for his success as they were most influential in demonstrating the value of hard work, respect for people, and the blessings of quality family time.
Quite active in various industry associations, JP subscribes to an open style of communication, enjoys setting clear goals, and believes in a whole-team approach to create quality, successful projects.